Taking her inspiration from the discovery and sale of a series of Van Gogh paintings in Weimar Berlin, Clare Clark’s brilliant new novel is a thought-provoking look at the politics of the art world and its impact on those who risk their reputations in this unstable environment. The fact that the story is set in Germany between the wars heightens our sense of this instability, and we can’t help but see the shifting allegiances as a prelude to future events. Clark captures the terrifying sense of how quickly a world can shift its rules and arguments, leaving those on the wrong side vulnerable.

At the heart of her novel is the charming, yet diffident young art dealer, Matthius, modelled on the real-life Otto Wacker, who becomes a central, if shadowy, figure in events. He remains difficult to know, deliberately so, but he will affect all three of Clark’s major characters, whose stories are skilfully woven together over the course of the novel.

The opening chapters, focusing on Julius, the art critic who has made his name with a groundbreaking study of Van Gogh’s work, and who will stake his reputation on verifying the rediscovered master pieces, are set in a hedonistic Berlin of artistic and personal freedoms. But even at the start, in 1923, there are signs of unrest, caused by the outcome of the last war. Spiralling inflation is sowing ominous seeds and, early on, we are reminded of what is to come. Julius has had to call a glazier to mend a window he himself has broken in a fit of anger, but the glazier sees this as a reflection of the times they’re living in:

‘The hoodlums these days, the glazier said, they’d smash us all to pieces in our beds. There were still fragments of glass on the flagstones.’

Such casual observations will take on a much greater resonance as we move into the final section of the novel, set in 1933. Julius himself becomes an ardent supporter of Matthius’s claims and becomes drawn into a complex struggle to prove the veracity of the paintings.

The second section of the novel, set in 1927, takes up the young artist, Emmeline, as its central figure. She is a fascinating character, at times self-destructive, but always committed to finding a route for herself though the increasingly murky world of commercial art. She refuses to concede to social expectations and her subversive rebellions add a humour to an otherwise darkening picture. We’ve met her first in Julius’ section, but she will come of age in her own section, whilst the backdrop to her existence in Berlin becomes increasingly fraught.

The power struggles between individuals is replaced by the terrifying struggle of the individual against the new powers of the state, and it is impossible to read the third section of the novel, Frank’s diary, written in the present tense, without a sense of dread. After all, we know what is coming for the Jewish population, and for those regarded as enemies of the state. This is a brilliant novel – engrossing and thorough in its creation of a world trapped between two terrible wars. The element of the story concerning Van Gogh’s paintings allows for a question about truth, about what we can ever prove, or know. Frank’s niece reminds us that the Nazis are rejecting ‘Jewish Science’, dismissing the thinking of Einstein because it doesn’t suit their ideology, and says, ‘I think at least scientists understand that nothing is true until they prove it.’ Perhaps Clark is reminding us that seeking to define an absolute truth, whilst being selective about the experts we will believe, is potentially dangerous. Early on, Julius reflects on the work of the Dadaists, thinking,

‘The Dadaists might be fools and charlatans, but in their destruction of all artistic enterprise they had hit on one immutable truth: a society gets the art it deserves.’

Julius has his certainties about life questioned throughout the novel, but I can’t help feeling that that final part is true, albeit taken out of it’s original context – a clever, thoughtful novel about a world which allows itself to be torn about by political extremists, by leaders who are selective in the truths they seize upon, is perhaps the novel we all need to read now. As Frank notes in August 1934, ‘It’s getting harder to see where it ends.’

My thanks to Kimberley Nyamhondera at Little, Brown for my review copy.

Catch the rest of the blog tour here: 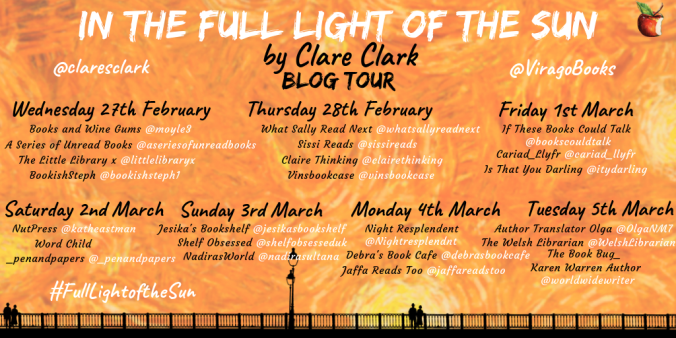