Today I’m welcoming Liz Hedgecock to Books and Wine Gums. Liz is the author of two novels and several short stories and novellas. Her most recent title is Sherlock Holmes and the Deathly Fog. She’s published by White Rhino Books.

Liz, tell us a little about your novels to date.

For some reason (I wish I knew), each book length among the Sherlock stories has become its own series with slightly different elements. Halloween Sherlock is more traditional, Sherlock and Jack is more about Jack’s growth than Sherlock, really, and A House of Mirrors looks at things from Mrs Hudson’s point of view. Book 2 in that series should turn up in early 2018!

So far I’ve written two full-length novels, Murder at the Playgroup and A House of Mirrors, and a range of shorter texts; two novelettes in the Halloween Sherlock series, two books of short stories (one contemporary, one Sherlock), and two novellas in the Sherlock and Jack world.

I love the title of the latest – where did your inspiration for Murder in the Playgroup come from?

I’ve loved Agatha Christie books since I was a teenager, and I fancied writing a cosy mystery series with a modern protagonist who has to deal with young children as well as moving from London to a picturesque village called Much Gadding. I decided that starting with the local playgroup, and making it a locked-room mystery, would be a good opener. The plan is that the characters will grow with the series. I’m currently writing book 3 for my NaNoWriMo project – hopefully the draft will be finished by the time you read this!

Which is it harder to write – period crime or contemporary crime stories?

That’s a tricky question! On one hand, there’s all the research involved in period crime – bustles, hairstyles, gaslights, whether the police had whistles or rattles. However, with contemporary crime there’s modern police procedure to deal with, and how much current detail to include, since things like smartphones and technology change so rapidly.

Keyboard for drafting and editing, every time. I scribble notes though, and my character arc plotting and plot outlines are always handwritten.

When did you know you wanted to be a writer?

I think it’s always been there. I’m an only child and an avid reader, so I spent a lot of time with books, growing up. There’s a particular kind of power in shaping a narrative, making a story, and inviting people in. What could be better than creating your own world, your own story, for other people to enjoy? But I only got properly serious about it 3 years ago.

What is the best part of being an author?

Nice reviews, either in person or online. And being able to work at home is pretty good too.

Hmm…probably the bit where I hand over my book to beta readers, or hit the publish button on Amazon, and wait. The bit where, even though I’ve sweated blood over it, I still worry whether people will like it, or think it’s the biggest pile of rubbish they’ve ever read. And I still feel like that even after beta readers have told me how much they enjoyed it!

Who are your writing heroes?

Charles Dickens would have to be one. Novelist, magazine editor, campaigner for good causes, plus all those readings and tours. How on earth did he fit it all in? And I love Joanne Harris’s risk-taking with the range of her novels – not just Chocolat over again – and her helpful, outspoken, challenging Twitter presence.

If you had to be stranded on a desert island with three fictional characters, who would you choose, and why?

My first choice would be Mark Watney from The Martian. I found him very annoying, but he could probably rig up all sorts of devices to either improve living conditions, or get us off the island with a solar-powered raft made of coconut shells.

Second choice would be Ford Prefect from The Hitchhiker’s Guide to the Galaxy. He might be able to get us a lift, and he would also have remembered his towel. A good person to have around in a crisis.

Finally, I’d choose Tuppence from Agatha Christie’s Tommy and Tuppence books. She’d be positive, resourceful and fun to talk to, and good at solving any mysteries that cropped up. Oh, and she was a volunteer nurse in the war, which could come in handy. Plus I think she’d be good at keeping Ford and Mark in line!

Editing. Lots of editing. When I finish my NaNoWriMo draft I’ll have 4 full-length books waiting to be dealt with, and I want to get at least 2 of them out into the world before I start any more!

Thank you very much for taking the time to answer these questions! 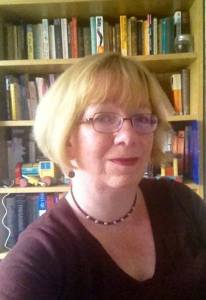 Liz Hedgecock spends much of her time hopping between the nineteenth and twenty-first centuries, murdering people. To be fair, she does usually clean up after herself.

Liz’s reimaginings of Sherlock Holmes, Bitesize, a collection of flash fiction, and Murder At The Playgroup, a modern cozy mystery, are available in ebook and paperback.

Liz now lives in Cheshire with her husband and two sons, and when she’s not writing or child-wrangling you can usually find her reading, messing about on Twitter, or cooing over stuff in museums and art galleries. That’s her story, anyway, and she’s sticking to it.

One thought on “An interview with … Liz Hedgecock”