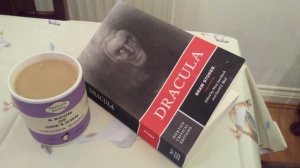 Published in 1897, Bram Stoker’s Dracula was late to the Gothic party of the previous century but fitted in nicely to the Nineteenth Century fin de siècle fears of invasion and change. This is an ancient monster who plots his way to England so that he has a larger pool from which to drink. The story is narrated in a series of letters, diary entries, journals, telegrams and newspaper reports. This epistolary form allows Stoker a greater sense of realism, so that we are more ready to accept the fact that such a demon can exist in what is a recognisably modern world – think of Jonathan Harker’s use of shorthand, Dr Seward’s phonograph machine, the Kodak camera. Ultimately, however, you can have all the modern paraphernalia you like, but when it comes to vampires, you’re going to have to go back to the stakes and the garlic.

Dracula is one of those stories you know, or think you know, before you’ve even turned the first page. Indeed, I struggled early on with Jonathan Harker’s inability to recognise the danger towards which he’s travelling at the start of the novel. The young solicitor is journeying into Transylvania in order to deliver legal documents to one Count Dracula, a European nobleman who wishes to purchase property in England. Despite the locals crossing themselves furiously and presenting him with a crucifix, Harker doesn’t have our years of cultural familiarity with the titular villain and, at one quite amusing point, makes a note in his journal about the nationalities of Transylvania ‘(Mem., I must ask the Count all about them)’. Shouting, ‘but he’s Dracula!’ doesn’t change the fact that Harker walks into the Castle and soon finds himself trapped in a horror he had not foreseen.

From this moment on, events move quickly and, leaving Harker languishing in Dracula’s castle, we move to Whitby and meet the two young women who will form the heart of the novel and bring together a group of good, strong men who will band together to vanquish the evil vampire. Whilst Mina Murrray (soon-to-be-Harker) is undoubtedly an excellent example of the New Woman, I found the emphasis on her essential goodness and purity a little trying at times. Still, I was pleased to see that she plays a key role in the fight against Dracula, and again, I have to try to remind myself that I am reading this over a hundred years after its publication. Some things travel well, and others don’t.

What is still apparent is the horror of the events. This sense is often to be found in some of the seemingly more minor elements of narrative – the account in the Demeter’s log, the ship which Dracula boards in order to sail to England, is truly chilling. Elsewhere, we see the madman, Renfield, and his increasingly desperate desire to be united with the ‘master.’

For me, it is hard to distance Stoker’s Count with those we’ve all seen on the screen (I’m never going to be able to visualise the Count’s bushy eyebrows, for instance). However, there is much to enjoy about this adventure which charges through Europe and England at a furious pace, and which offers everything we might require of a vampire tale. Pick a dark night to have a read, and don’t open the window to a large bat.